A snake biting itself! Only few images or videos in this world are weirder than that of a snake devouring itself. A simple search on YouTube, for instance, would bring up a plethora of videos of a snake biting itself, especially its tail. It's these incidents which cause many people to wonder why a creature can opt for self-cannibalism, which actually is never a good sign. Here is the answer:

While researchers may not have nailed down what precisely triggers a snake to bite itself, there are reliable hypotheses to the effect that a snake can resort to biting itself as a result of too much stress, confusion, excitement, ill health, or hot conditions, among others causes.

Let me first of all state that it's unusual for a snake to bite itself or the owner, for that matter. Thus, a snake biting itself is a rare phenomenon, rarer than suicides among humans, as a matter of fact. Actually, some snake species may not attempt to bite or eat themselves at all in their entire lifetime. The Pantheropis obseleta (the American rat snake) is the only snake species which is known as being notorious at biting or trying to eat up itself. That is according to the New Encyclopedia of Snakes. That said, let's take a deeper look at the potential causes of this weird behavior among snakes.

You must have been hit with stress at some point in your life, and you understand what it means to be stressed. While having stress is normal, too much of it can take a heavy toll on you, causing you to behave awkwardly. In fact, some people go as far as contemplating committing suicide, especially in extreme cases where stress morphs into a state of depression. Now, a snakes is like that too. It gets stressed sometimes, and when stress gets out of control, the snake can resort to biting itself or even you, the owner.

By its very nature, a snake is a fragile pet, and you will need to keep it in a precise and balanced habitat. Any deviation from the normal conditions, whether it's humidity or temperature, could potentially result in stress, causing the snake to self-cannibalize or turn against you. Besides changes in temperature and humidity, other stressors may include the following:

Excessive handling: Your snake is, by nature, a solitary reptile. Just because it's your pet doesn't mean you will handle it however you want. So, if you handle your snake too much in the name of interacting with it, that can cause stress and self-biting.

Too small terrarium: If you have ever been in a police cell, then you understand what being in such a small room means. You will hardly sleep, sit, stretch, or even stand comfortably because the space for executing such is so limited. If you put your pet snake in an enclosure that is too small, that's tantamount to being in a police cell. The snake won't be able to stretch its body to full length, and that can culminate in stress.

Inadequate substrate: Lying and burrowing are part of a snake's life, and that calls for adequate substrate. If the substrate provided for your snake does not allow it to adequately and comfortably burrow and lie, the pet can become stressed up

When it comes to food, your snake can depict confusion and/or over-excitement behavior, which can be manifested in various different ways. And while I mentioned poor feeding schedule in the previous section, it's only fair to talk about food in detail here so you get to appreciate the matter in question. Have you ever been overwhelmed by real hunger pangs? This is a reaction to an empty stomach, which can defeat even a lion and disorient anyone, making it extremely difficult to make rational decisions. That is why you hear cases of people stealing food.

When hunger pangs take toll on your snake, all you should expect is weird, irrational behaviors, such as biting itself, and you may not be spared as well. Just imagine the snake staying in it's enclosure on an empty stomach, never to see any preying opportunity! This will translated to a state of confusion, and the only option left would be for the snake to bite or try to swallow it's tail, or anything it finds around. Naturally, a snake is a predator, and if you eliminate the prey/food element from its life and subject it to hunger instead, that may perfectly send it into confusion. Thus, biting or eating itself would be what you may want to call a survival mechanism.

Poor vision during shedding is yet another potential cause of confusion. Researchers have revealed that snakes experience diminished vision when they are shedding their skin. As a result, the snake can confuse it's tail for an enemy, triggering a defensive response from the reptile. That response could be self-biting. So, make no mistake of touching your snake during the shedding cycle.

There have been numerous reports of some snake species biting themselves during their end times. This is a telltale sign that the snake may be suffering from a neurological condition. As the snake feels pain, it may bite itself or anyone around as a way of venting it's frustration.

Preventing/Stopping Your Snake From Self-biting

It's obvious that seeing your snake bite itself isn't a normal thing; it isn't something to take for granted either. Therefore, the thing would be to take an appropriate action pronto. In so doing, you must remember one thing: do not get involved physically with the snake or get near it. The snake's teeth curve inside, and if you try to separate the head from the tail, it may not work at all. It's therefore advisable to be patient and wait for your pet to stop biting itself before you can do what is necessary.

Let's now look at some techniques you can apply to stop or prevent your snake from self-biting in the future.

Fixing the temperature: Is the temperature of your snake's enclosure too high? Try adjusting it to optimal levels. You can do this by temporarily turning of a heat lamp in the enclosure. If your snake doesn't stop the behavior after you have withdrawn the lamp, you may want to spray it with cool water. On the alternative, place the snake in a bowl of cool water, and it will regain its normal body temperature. Snakes are cold-blooded animals, and as such, their body temperature varies with the surrounding.

Changing the enclosure: If your snake is biting itself as a result of living in a too small enclosure, you can stop that by simply transferring the pet to a larger terrarium that allows it to stretch to it's full length if it wants to do so. This eliminates any related stress.

Fixing the diet: Ensure that you feed your snake sufficient food on a regular basis. The snake may be self-cannibalizing as a result of hunger pangs.

Reduced handling: With snakes preferring to be alone, reducing how much you handle them could make them more comfortable, and that may address any self-biting concerns. A bonus is to ensure that your snake lives in a noise-free environment.

Consult a herpetologists if the problem persists even after trying to address the potential causes. 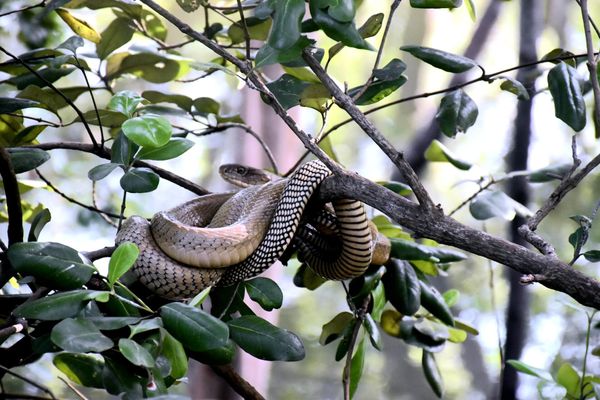 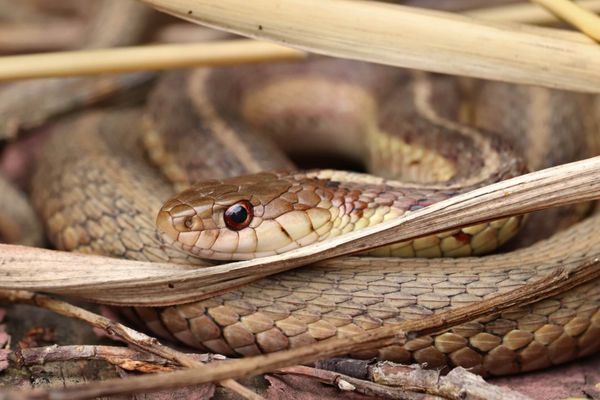 Caring for a garter snake involves quite a number of things. These include caging, feeding, breeding, lighting, and temperature control, among other care practices. You must get these practices right if you want to give your pet proper care.