Usually, snakes spend the majority of their time hiding or curled up. Furthermore, they enjoy hiding and privacy, especially if they are old or when digesting food. Decreased movement will often indicate happiness and contentment. However, some species are more active than others, especially the hunters. But what happens when your pet snake suddenly becomes hyperactive? Could it be a cause for alarm if it's incessantly roaming?

A hyperactive snake could be a sign of hunger, seeking a mate, shedding, or discomfort. You should understand your pet's feeding preferences and behaviors to get to the bottom of its behavior. When it's about to shed, it can be more active than usual because it could be trying to peel off the old layer of skin. It could also get frisky when it has an urge to mate after reaching its sexual maturity.

As you go through today's article, I will highlight some of the causes of a king snake suddenly becoming very active. I will also help you discover what to do when your snake becomes exceptionally busy. Here's all you need to know!

Why is My King Snake Quite Active?

You might be so used to your snake's calm nature, how it curls up in its hiding and chills out. It gets confusing when it starts getting hyperactive. You will have endless thoughts, especially if you have never owned a snake before. Surprisingly, hyperactivity is quite usual for some species, and for the inactive species, it might be seasonal.

Snakes are not very active animals by nature. They will generally sit in their little habitats and observe their environment unless provoked. Although known to be predator animals, they only roam when either their external or internal environment is disrupted.

If you are worried about the sudden hyperactivity of your king snake, the following could be some of the reasons:

When was the last time since you fed your pet snake? A hyperactive snake could be a sign it finished digesting its last meal and is ready to feed again. Younger snakes need to feed regularly to assist in their growth. When the snake gets older, consider increasing the food quantity, but you can reduce its feeding periods. Older snakes have a large surface area, but their appetites are not as high as younger ones.

However, if you have an active hunter, it could start roaming and excessively flick its tongue or reaching its head up because it associates your presence with eating. This also happens when you do not spend much time with it unless it's time for dinner. The following are some of the behaviors you could review to determine if your snake's hyperactivity is a hunger sign:

Warmer weather makes a snake's behavior more erratic. During early spring and late summer, the male king snake may get frisky due to an urge to mate. For snakes in an enclosure they may move around their cage more. They begin to survey their environment for pheromones released by a female snake.

Your male king snake might have reached its peak of sexual maturity. In this case, the snake will be more active, causing concern on your end. Male snakes move extensively during late summer in search of mates. Your snake will get frisky during this period as well, but it's short-lived.

Snakes enjoy living in a comfortable environment. They do not like extremely hot or cold environments. However, each species will desire a different temperature range.

Habitable humidity levels are essential for every animal. Excessively high or low humidity can make a snake very restless. It will start hovering about to seek a more favorable area.

Snakes need moisture, but it should be favorable and controlled. The natural humidity in the atmosphere keeps their respiratory tract moist. You should ensure the humidity levels in its vivarium mimic that of its natural habitat. Your king snake will require slightly more moisture during shedding to help it shed, especially around its eyes.

What should you do when the humidity levels are unfavorable?

Keeping track of your snake's enclosure humidity level should be a priority. If the humidity is too high, you should take the following measures:

When a snake begins to molt, it may have some hyperactivity episodes. It will start to move about, seeking rough surfaces to rub itself against to scrape off it's old skin layer. Activities that indicate molting hyperactivity include:

Note that your king snake will want some space during this period. Trying to hold it can cause an aggressive response.

Snakes have many reasons why they prefer to remain unseen. One could be, it's uncomfortable when the room is full of people, especially unfamiliar faces.

A snake can also hide after a meal and in preparation to shedding. Providing hides in the snake's enclosure helps to make the space natural and more comfortable.

What do I do when My King Snake is Very Active?

When the snake's hyperactivity results from external factors, there are things you could do to help ease the situation. To come to their rescue, try the following:

If your snake's unrest is caused by hunger, it's only practical to feed it. Younger snakes may need your attention more often when it comes to food matters. Always ensure you understand what type of food your snake enjoys.

Try increasing the quantity of food it takes, if it's getting hungrier quite often. You could give it a larger size of prey.

Control the Temperature and Humidity

Imbalanced temperature and humidity will cause your snake to be hyperactive. Since reptiles are cold-blooded animals, they need the environment's favorable conditions to keep the internal temperature balanced. Since you are the caregiver, it's your responsibility to keep these conditions balanced in and out of season.

Different snake species portray different behaviors. Some snakes are more active than others. If your snake is an active hunter, expect it to be hyperactive. Moreover, if the snake is a tropical snake, it will need slightly more humidity to remain calm. Invest in a hygrometer and keep the humidity levels between 55-60%. This will help it move about less often.

If it's a temperate snake like the corn snake, lower the levels to about 40-50%. Also, it's advisable to know the snake's gender. A male snake is prone to more activity during late summer and spring as it searches for a mate.

If your pet snake is shedding or is uncomfortable with contact, leave it alone for some time. It might need its privacy to digest or adapt to the new environment. Naturally, snakes are not fond of regular interaction and handling. When it gets too much, the snake might want to be left alone for a few days.

It can be very alarming when your usually relaxed pet snake becomes frisky. However, if the snake is an active hunter, it's about time you expected more movement. If it's the mating season, then the male snake will be very busy as it seeks out a female, especially if it's not used to being alone in an enclosure. Know your snake's habits depending and its species, especially in it's natural environment, to understand it's behavior. With more insight, you can now diagnose your hyperactive pet snake properly. 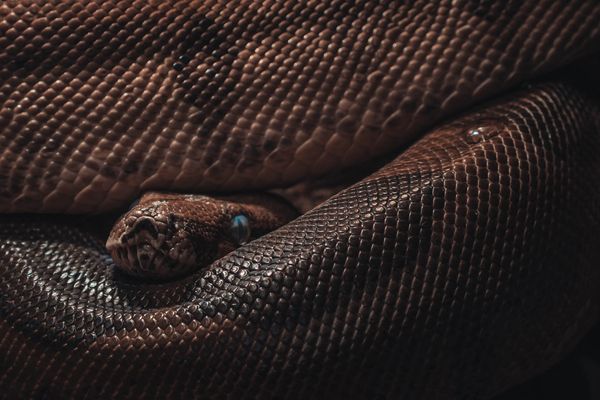 Some snakes are nocturnal which means they like to sleep during the day. They also like to hide. This allows snakes in the wild to avoid their predators and helps them to maintain a regular body temperature.

Just because a snake adopts an unusual behavior does not mean it's aggressive. It could be a defense mechanism, a territorial, or a feeding response.