Despite their disprivileged lack of hands and legs, snakes can climb trees quite swiftly. In fact, they tend to spend a chunk of their lifetime on trees either to escape predators or to hunt unsuspecting prey. But every mission must suffer some fallback from time to time, and for snakes, the ground is always eager to receive them hard.

Can a Snake Survive a Fall?

Snakes have more likelihood of surviving a fall than people. This is often because they are smaller and exert less force on impact. However, larger snakes and those with full bellies may have fewer chances of survival due to their large sizes.

In this post, we'll provide you with more information on factors that make a snake survive a fall and how to treat your snake in case it's injured after falling. We'll also discuss the key factors that make snakes fall and why it's very rare for them to drop. Stick around to learn more!

You might assume that since snakes rarely fall from trees and through an experience you might be right. Various studies show that snakes are careful creatures when it comes to climbing a tree or high terrain. Snakes grip on a tree or terrain with extra force than required so that they can avoid a fall.

The amount of force that snakes use to climb a tree is debated but it is a fact that snakes exert more effort in climbing than they actually require. However, some smooth trees that don't provide any foothold often defeat snakes and they might fall off. Just like other animals, snakes also make miscalculated steps that often lead them to the ground.

Some may argue that since snakes have flexible spines, they can probably bend and curl to reduce the impact on the ground. Perhaps they might be right, but not for the reasons you might expect. Snakes tend to survive nasty falls in the jungle and from tall buildings. The reason for this often varies based on the terrains, type of snake, and their sizes.

But how do they climb up in the first place?

Snakes don't have arms and legs, their heads are connected to a flexible backbone with hundreds of ribs running down to the tail. Rather than pushing all their body weights on a double pendulum the way humans do, snakes push themselves forward by bending and flexing their entire length on their tubular bodies.

However, snakes don't need hands, legs, or toe pads to climb trees. They can also do a lot of things like crawling, burrowing, swimming, and even gliding through the air. In any case, their body movements are always similar.

Snakes climb by bending and flexing their bodies. Although they may seem unsuitable for climbing, you'll often find them sliding over the coarse tree backs. Since most trees are rough, snakes are able to firmly grip as they navigate upwards. This makes it extremely difficult for them to fall. Tree climber snakes like the western rat snakes and brown tree snakes often avoid smooth backed trees to avoid falling.

What's the secret behind their extremely good climbing skills?

Snakes often have a unique method of climbing depending on the terrain. In an experiment performed by the University of Cincinnati professor and students, snakes were put in containers with simulated tree stamps made of cylinders and pegs as branches.

This showed that snakes often climb up by holding their weight around branches. If there were no branches on a tree, snakes will use the movement called concertina to move upwards. However, in both of these climbing methods, snakes often rely on friction to hold their weight and to avoid slipping.

So what makes a snake fall?

Snakes often fall off due to several reasons that are mostly influenced by climate change. You see, snakes are cold-blooded animals. This means that they don't produce their body heat and often rely on the environment. When the climate is cold, they have to reduce their activities to conserve energy. When it's warm, they have to move faster.

Researchers have been investigating the activities of snakes during cold climates and how snakes tumble down from their trees. During cold climates, snakes can become completely immobile while on top of trees. This is very dangerous as the snakes no longer have any grip and end up falling.

In Florida, for instance, many snakes including iguanas have been reported to fall often out of their arboreal homes. Additional research at Miami University also proved this fact.

Snakes on a limb

During hot temperatures, snakes often move faster and stretch further along branches, unlike in cold seasons where snakes meander along a branch improving their stability. However, they often tend to fall off during the cold seasons as they try to progress on branches.

Snakes often tend to fall off from thin branches rather than large and thick branches. On thin twigs, snakes have to make more curls and loops around the branch. Since their movements are slower during the cold season, they often fall off before making their final turns.

What Determines Whether Snakes Survive a Fall?

Snakes do fall. However, this does not mean that they may suffer from the drop. There are many factors that can influence the severity of a fall on a snake. Some top factors include:

In fact, research shows that snakes are often fear falling not due to physical hurt, but rather in fear of predators. Snakes are often more likely to of being exposed to other predators on the ground than on trees. On trees, snakes can hide through camouflage behind leaves and branches.

If there are predators chasing the animal or enemies on the ground looking to devour it, the chances of survival are pretty low if the animal falls. Depending on how fast the snake adapts to escaping the prey after the fall, it may survive the drop.

Snakes usually have a great sense of balancing their weight on the trees. Therefore, falling from high above is much less a possibility. But in case that happens, the survival of the snake depends less on the height and more on the weight of the snake. Some snakes like the flying snake often have a better chance of surviving due to their great ability to flex and cruise along tree branches to get to the ground.

A small garter snake from the branch of a tree often has less weight than most other snakes. The garter snake has higher chances of surviving a fall than most other snakes. In other words, if the snake has low enough terminal velocity when they fall, they are more likely to survive. On the other hand, snakes that have considerable weight, like an anaconda, are less likely to survive a fall from high terrain.

Therefore, not the height but the terminal velocity of the fall determines the chances of survival for a snake. Also, chances of severe injury are enhanced in case the snake has considerable weight and falls from a good height.

After being snatched by eagles, snakes often put up quite a fight. Therefore, eagles have to drop them to make them lose stability and focus. At times, snakes may survive the fall with some injuries and escape the prey. However, if it falls on thick and pointy rocks or thorny bushes, they often have fewer chances of surviving.

Why Are Most Snakes Immune to Injury After a Fall?

To understand why most snakes are immune to injury after a fall, we must get more insight into the anatomy of snakes. Snakes are creatures that do not have complex anatomy. The snake's skeleton only consists of a skull, ribs, and vertebrate. The ribs in a snake's body are such that it enables them the flexibility to adjust and crawl. The bunch of ribs also protects their organs.

Therefore, in the situation of a fall, damage or injury to the snake's internal organs is protected due to it's ribs that stretch throughout its entire body. In the event of a fall, the ribs absorb the shock of the fall and prevent internal organs from being damaged.

How to Treat an Injured Snake?

Injuries in snakes after falling from a considerable height are difficult to trace. Therefore, it is best that you inspect the reptile first and look out for lumps in the body. In case there are prominent lumps and stiffness, the reptile may be injured.

In the event of an injury, you must inspect the injury to determine it's severity. External injuries like bleeding and perforated skin are easy to spot. To treat external injuries, you can wash the wound and use Neosporin as a remedy for the situation. You must also find a professional veterinarian to ensure that the reptile is okay.

Usually, snakes take 6 weeks to completely recover from any injury. Therefore, you should take note of the recovery measure and also check with the veterinary after the recovery period has passed.

Snakes may look disadvantaged without arms and legs, but they often have the most advantage on trees than other tree-dwelling animals. They can slide down trees, fly from one tree to another, and curl themselves as they climb up.

However, due to climate changes and other mechanical factors, snakes often fall just like other animals. They are tough creatures and they have pretty high chances of surviving a fall. However, this often depends on the terrain and height of the drop. If the ground is tough or they fall from high above the sky from the clutches of an eagle, they may not survive the fall.

If you think that your snake could have hurt itself after falling from a significant height, take it to a qualified reptile veterinary and look after the reptile throughout the recovery period. 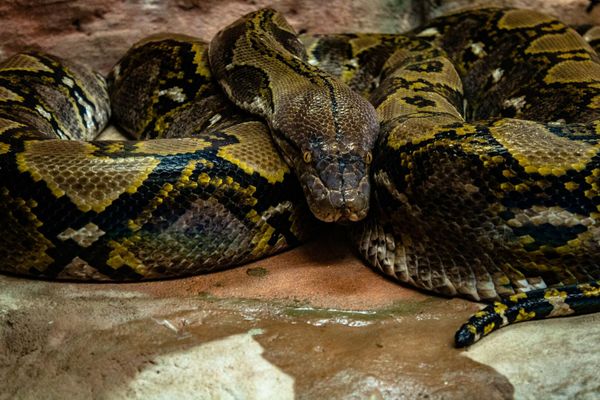 Most snakes are odorless. When you clean their enclosure regularly and are healthy, they do not smell. Moreover, when they do not sense danger, and it's not the mating season, you may not experience any unpleasant stench. 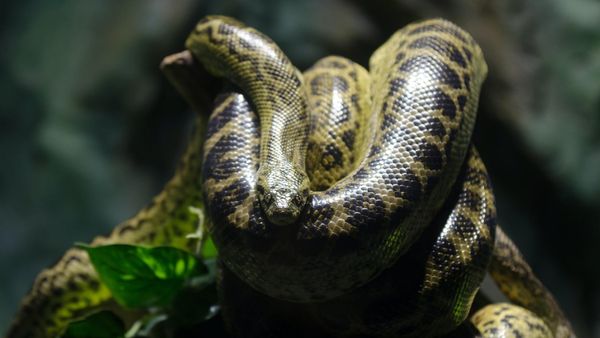